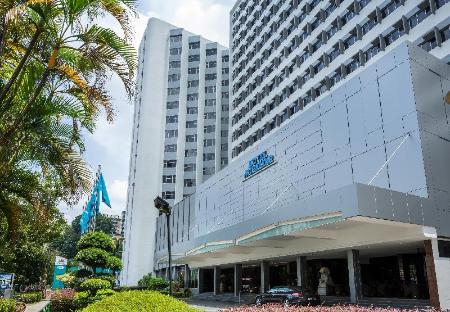 See all
Hotel Miramar Singapore - SG Clean Certified
Clarke Quay,Clarke Quay - View on map
"On my table in the room, there is a form for me to do a daily feedback about the customers' need(s) within the room. I pointed out a few problems and I sent in the form at the reception counter when I went out for meetings in the early morning. When I came back in the evening, I found the instant changes and rectification. Later, there was a friendly personnel called me to ask for my level of satisfaction. Even though Miramar Hotel, Clarke Quay is a 4 stars hotel, however, I receive a 5-star treatments. The food in the restaurants are very good and value for money especially the Japanese Buffet at IKOI Japanese Restaurant. The sashimi platter and the seafood soups are fresh, delicious and good with the friendly, patient and helpful kitchen workers/ chefs and waitresses/ waiters. I will definitely come back again. "
Show more
7.7 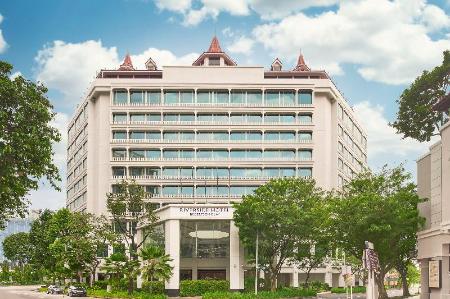 See all
Riverside Hotel Robertson Quay managed by The Ascott Limited (SG Clean Certified)
Clarke Quay,Clarke Quay - View on map
"We had 5 nts in Singapore and spent Christmas at park hotel. Got a good deal on Agoda and we really enjoyed our stay and would return again. Very new and good access to restaurants and taxis but quite far to walk to mrt. Especially in hot humid weather. I think if there are two of you, you are better off taking taxis as they are relatively cheap plus the drivers are honest and we have never had problems with being taken for a long scenic ride and they always give you the correct change. Very refreshing. Some taxis have slightly higher flagfall if they are bigger or newer but it is only 20 to 60c extra so don't worry too much. Just don't get the Mercedes Benz taxis as I think they cost a lot more. Save your money for the campagne brunch at the ritz Carlton instead! Quite popular so better make a booking. Also much better value than raffles high tea unless you prefer Darjeeling to bubbly. For seafood nearby try Jumbo seafood in Clarke quay. I think they are next to the micro brewery. You should order the chilli crabs and wash it down with tiger beer. Quite tasty. For lunch you cannot go past the $15 lunch specials at restaurants in Clarke quay. It includes service fees and gst. Cheaper than macdonalds in London! And if you want to spend even less then go to the hawker centres such as Maxwell food food court or Lau pa sat near shenton way. There are also coffee shops called kopitiams within walking distance. Read more in my review. Not noisy at all and best of all it has a big pool with nice lounge beds. Rooms are rather small but very clean and feature luxurious fittings such as bath robes and Sony flat screen LCD tv with lots of channels. I also liked the rain shower head as it had good water pressure and a separate hand held shower. We also received a Christmas gift but it was only a biscuit inside a pretty red bag! Oh well at least it was a sweet gesture. The hotel also arranged for carol singers at the lobby who actually sang pretty well."
Show more
8 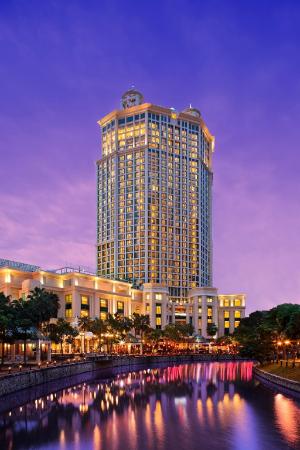 See all
Grand Copthorne Waterfront Hotel
Clarke Quay,Clarke Quay - View on map
"I was disappointed at first, I arrived on a very early morning flight in Singapore, and had let the hotel know well in advance when I booked that I would be arriving early so would wish to check in early. I had previously visited a few places in Australia prior to my stay and none of these hotels had a problem letting me check in early. I arrived at the Grand Copthorne around 6am, greeted by a very rude and unfriendly receptionist, only to be told if I wished to check in early I would have to pay an extra $150. I declined early check in, but was offered no advice at what I could do at 6am in Singapore or asked if I would like to rest or freshen up. I wasn't very impressed that I had to ask if I was able to freshen up somewhere. I was taken up to an area where I was able to get a shower and sit down, which was very nice but I also wanted somewhere properly to rest like a couch or a sleep pod. While I was waiting in this area I spoke to some other guests and was disappointed to find out they were being allowed to check in at 11am instead of 2pm like me, they had not paid $150 or had one of the very expensive rooms yet they were being offered an early check in. I was pleased with the service offered by the bellboys they were very helpful, the hotel was also served well by taxis, the longest I ever had to wait for a taxi was about 15minutes. I had to get taxis everywhere as the metro was just too far away. The hotel advertises that it is in Clarke Quay but it is at least a 20-25minute walk from Clarke Quay. When I was finally able to check into my room I was very impressed, it was a beautiful big room, very clean, and had fantastic views of Marina Bay. I thought the minibar items were very over priced so didn't use the minibar but enjoyed the complimentary water bottles offered - great idea! I loved having the use of the mobile phone, I used it just like a normal mobile phone and was also able to call home for free - fantastic! I also enjoyed the pool, much bigger than"
Show more
7.9 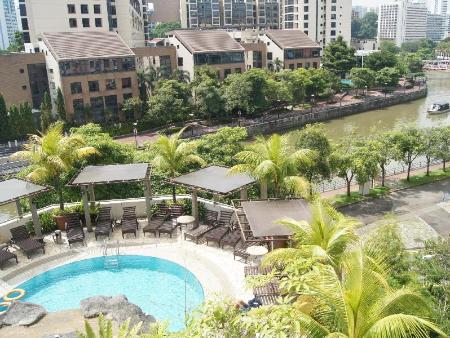 See all
Robertson Quay Hotel (SG Clean Certified)
Clarke Quay,Clarke Quay - View on map
"If you are visiting Singapore & you are looking a cheap hotel that is nice & clean. I would really recommend Robertson Quay hotel to anybody who is going to visit Singapore. Although the room is a little bit smaller but cleanliness is 'five starred' & the location is pretty strategic. Behind this hotel you can see a river and there's this pedestrian walkway which leads to Clarke Quay, The famous spot for party goers (5-10 mins walk) & from Clarke Quay you can easily get an access to the public transportation like Buses & MRT."
Show more
6.7 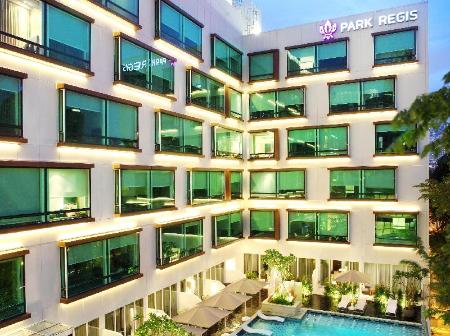 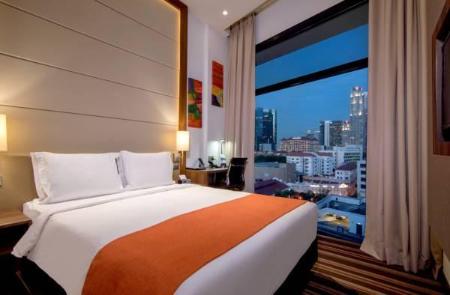 See all
Holiday Inn Express Singapore Clarke Quay (SG Clean Certified)
Clarke Quay,Clarke Quay - View on map
"Spend 2 night at this hotel and can fully recommend this one. New hotel and modern in all aspects. Staff were efficient and polite from booking to cleaners. Special mention to staff working at breakfast buffet. Always smiling and on hand to clean tables within seconds of leaving empty plates. The buffet was good and plentiful and suitable variety on offer. Small but okay gym located on top floor and next to very inviting pool The hotel location was a 5 min walk to Clark Quay and one of the best nightlife scenes in Singapore. MRT is very close and allows easy access to entire city. Highly recommended "
Show more
8.5 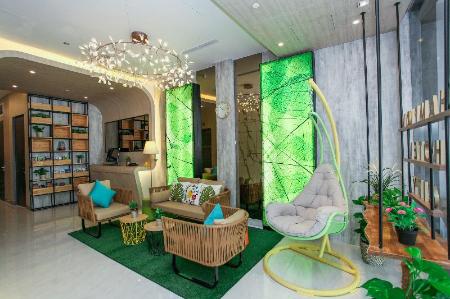 See all
Champion Hotel City (SG Clean Certified & Staycation Approved)
Clarke Quay,Clarke Quay - View on map
"My wife and kid (1 yr old) stayed at their double room. The space is just enough to accommodate us 3 with our luggage and stroller. You can't move much though, but it's the type of room that you need to comfortably sleep. Room is clean and the modern design is to be desired. Wifi is fast so it's a definite plus. Would've appreciate a breakfast inclusion though but there are lots of options outside as the hotel is situated in Clark Quay."
Show more
8.3 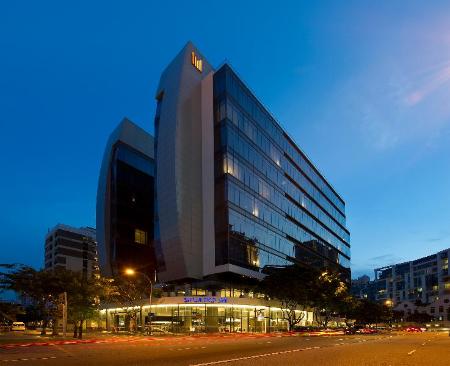 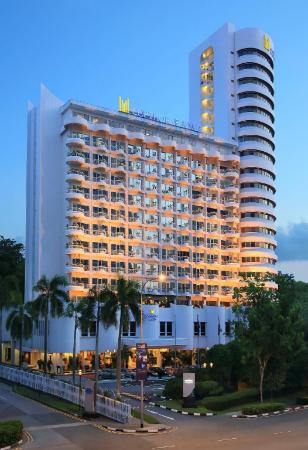 See all
Copthorne King's Hotel Singapore on Havelock
Clarke Quay,Clarke Quay - View on map
"The hotel is under renovation and I stayed in one of the nicely refurbished twin rooms in the Tower Wing. These rooms are a wedge shape but roomier enough for suitcases and clothes. Has everything you need. Beds are comfortable, carpet is attractive and nice under foot. A note says you can order different types of pillows from the front desk. Great to have an air conditioner adjustment switch in a hotel that actually works. Two bottles of water are supplied each day. Only thing I didn’t like is the shower glass screen only covers half the entrance and so it’s near impossible to stop water from splashing out into the open area. I felt sorry for the cleaner each day. About a 5 to 8 minute walk away is a fuel service station/garage that sells drinks, food etc which you can purchase for your room. The staff are very friendly and helpful. About a 15 and 20 minute walk away along the river are lovely restaurant areas in Robertson Quay and Clarke Quay. Unfortunate no MRT station is nearby."
Show more
7.4 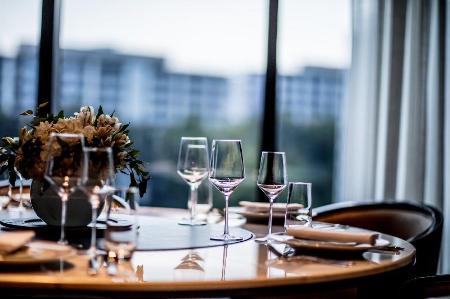 See all
InterContinental Singapore Robertson Quay
Clarke Quay,Clarke Quay - View on map
"The location is right in the Clarke quay area without being next to the night clubs. Plenty of food and drink to be had within easy walking distance. Safe walkways from the hotel to Clarke quay and lovely to stroll along the river in the evening. The hotel is a longer walk to orchard road and the city (about 20 mins) but easy to find and get to and from visa taxi (<$10)"
Show more
8.7

See all
Hotel Miramar Singapore - SG Clean Certified
Clarke Quay,Clarke Quay - View on map
"On my table in the room, there is a form for me to do a daily feedback about the customers' need(s) within the room. I pointed out a few problems and I sent in the form at the reception counter when I went out for meetings in the early morning. When I came back in the evening, I found the instant changes and rectification. Later, there was a friendly personnel called me to ask for my level of satisfaction. Even though Miramar Hotel, Clarke Quay is a 4 stars hotel, however, I receive a 5-star treatments. The food in the restaurants are very good and value for money especially the Japanese Buffet at IKOI Japanese Restaurant. The sashimi platter and the seafood soups are fresh, delicious and good with the friendly, patient and helpful kitchen workers/ chefs and waitresses/ waiters. I will definitely come back again. "
Show more
7.7

Discover the neighborhoods of Clarke Quay